One taste and I know I will be cheating on... 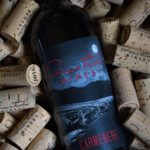 Four Twelve Winery crafts the Chilean Carmenere to produce a rival to the popular Merlot.

If there are "old souls" in the craft of wine making, then there must be the spirit of  an 18th century winemaker from Bordeaux, France embodied in Kevin Romasco of Moon Township.

Kevin, co-owner  and co-winemaker with his wife, Josianne Romasco of Four Twelve Winery appears to have mastered the ability to combine a rare grape with the science of fermentation and the discipline of patience to revive a vintage rarely produced today, not even in its native country of France  ---  the Carmenere.

Carmenere is a medium-bodied red wine that originated in Bordeaux, France and now grows almost exclusively in Chile. Originally, Carmenere was thought to be Merlot when it was first transplanted into Chile.  You won't find it to be a common vintage at the State Store.  Kevin told me the Carmenere grape is rarely utilized by other wineries and not a lot of companies make it without blending.

Kevin and Josianne wanted something different from the Chilean Sirah and Malbec that are more well known. And  that’s when they landed on the Carmenere.  The grapes arrived from Chile in their Moon Township home nearly two years ago.

And then, the delicious mystery of science and patience came together.  "We won’t release anything until it’s absolutely ready… won’t rush it and put it out on the market," Kevin added.

Striking aromas of raspberry sauce, sour cherry and green peppercorn awake my senses as I bring the wine glass up to my lips.  I observe the legs, the similarities of body and texture to Merlot, yet I find myself wanting more.  And before the glass is empty, I know that I will soon be cheating on my old love, Merlot.